✕
✕
VIEW ALL Spa Pools
VIEW ALL Swim Spas
Our full range
About Sapphire Spas ✕
How to choose a spa
Helping you make the right choices : a spa is a part of your everyday life, so choose one that fits you
How to choose a swim spa
Are you buying a swim spa for family, fitness or fun?
Why choose Sapphire?
Every feature on our simple spaside touchpad control systems has been designed to maximise energy savings
Colour palette
Stylish and sophisticated with the tones and colours that suit your home
Spa accessories
Sapphire Spas accessorires : steps / cover lifters / mySpaSHADE
Spa news : blog
Let us teach you everything you need to know before buying a spa
Responsive Manufacturing Updates
Spa owners information ✕
mySpa@home HELP
Sapphire Spas are here to help once you get your spa home
Your questions?
Look through our FAQs to see if they help, or contact us if you still have a quesion
Spare Parts
We can supply spare parts throughout Australia, via your local Sapphire Spa store
Service request
Contact us if you need assistance; we're here to help
User manuals
Our library of user manuals for all spa componentry: new & old
Warranty & Registration
As an all Australian, locally designed & manufactured spa brand, we offer you a trusted warranty backed by quality controlled manufacturing
Your local store can help
Proudly partnering with retail stores nationwide ✕
WHERE TO BUY : STORES
Sales & support from your local store, in partnership with Sapphire Spas
Contact Sapphire Spas Australia
We're hard at work in our Australian Manufacturing Facility, but here to help if you need us
Proudly Australian
Sapphire Spas was established with the goal to create a point of difference in manufacturing a premium quality spa pool
Proudly exporting Worldwide
Sapphire Spas export has throughout the world, with retail partners in New Zealand, Europe, UK, Reunion Island, Mauritius and Thailand
SPARE PARTS sales
We can supply spare parts via your local Sapphire Spa store
CLICK the stage below that you're looking for information about ✕
PREPARE for your spa
Everything you need to know once you’ve bought your spa, where to put it at home & how to prepare for the delivery
INSTALL your spa
Technical information for your tradies - ask us if you need something that you can’t find in here
ENJOY your spa
mySpa@home HELP is here to guide you every step of the way as you enjoy your new spa at home
Tips & Tricks
We understand nothing ever goes to plan so here’s some knowledge we’ve accumulated over the years that should help you out of most tricky situations
You Tube mySpa@HOME video support
← Back to blog

The Science of the Pineal Gland 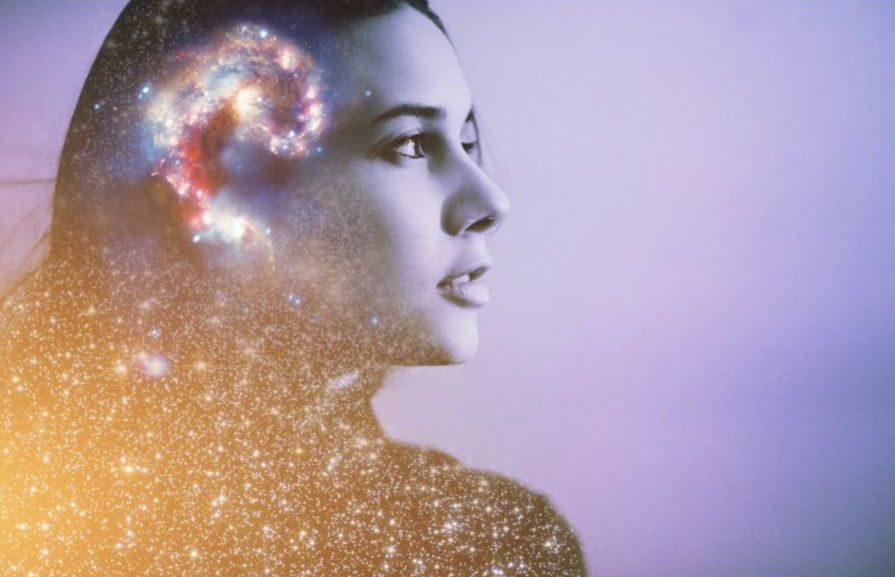 What Is the Pineal Gland? Where is it? And Why It Matters

History of the Pineal Gland

The pineal gland has been studied throughout history by many different cultures and religions. The name derives from its shape, which resembles a pine cone and in ancient times, it was thought to be the seat of the soul. The Greek philosopher Plato believed that it was the “principle of sight”. In Buddhism, it is considered to be the “doorway to enlightenment” and even the Vatican itself features a giant pinecone in the Vatican wall known as the Fontana delle Pigna or Pigna (pinecone) for short. The pineal gland wasn’t physically discovered until the 16th century by Dr. Andreas Vesalius, who was one of the first physicians to accurately record and illustrate human anatomy based on his findings from autopsies and dissections. Its function remained a mystery for many years but in the late 20th century however, researchers began to unlock the secrets of this important gland.

Modern Science, Sleep and the Pineal

Modern science has shown that the pineal gland does indeed play an important role in our physiology. As stated earlier, melatonin is a hormone that helps regulate the body's circadian rhythm (or sleep-wake cycle). The production of melatonin is highest when it's dark outside, and this is why people tend to feel more spiritual when they're in darkness or during night time. This is also why many people use candles or incense when they're meditating or trying to connect with their spiritual side. The flame from a candle or the smoke from incense can help stimulate the pineal gland and encourage the production of melatonin.

One of the most important things melatonin does during sleep is promote detoxification. During sleep, the pineal gland ramps up production of melatonin and other cleansing chemicals. It encourages the body to clear out harmful toxins that have built up during the day. This process of detoxification is thought to be especially important to help cleanse and rejuvenate our brains, preparing us for another day of learning and memory-building. Sleep deprivation can interfere with the production of melatonin and disrupt the body's normal sleep-wake cycle which can in turn lead to problems such as fatigue, irritability, and difficulty concentrating. So getting enough sleep is important for overall health and can help improve mood, cognitive function, and vitality.

Some people also believe that the pineal gland plays a role in spiritual experiences, such as seeing visions or hearing voices. The pineal gland is known to produce DMT (dimethyltryptamine) and is the source of our dreams when we sleep at night. DMT is a powerful psychedelic compound that can produce hallucinations and intense spiritual experiences. It is believed that DMT is released by the pineal gland during moments of extreme stress or during NDEs (near-death experiences), and that this is what allows people to experience the afterlife. So when we are having wild dreams which are very abstract and sometimes make no sense to us at all, it's actually because of a flood of DMT naturally produced in our sleep, we are actually tapping into another realm of reality and it happens every night. 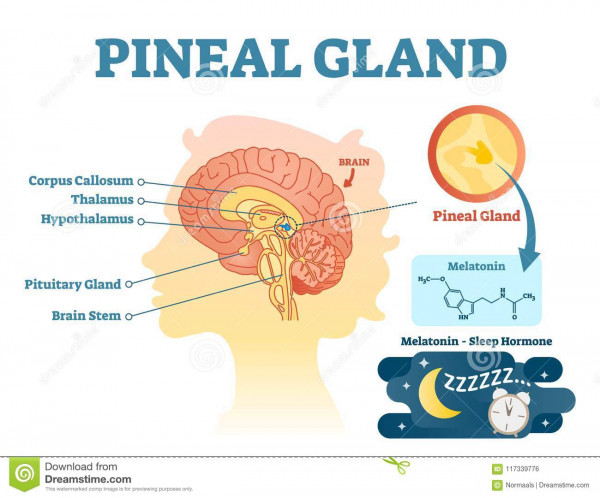 The Pineal Gland As We Grow

While the pineal gland is most commonly associated with sleep and the circadian rhythm, it's also important for sexual development. The pineal gland produces another hormone called serotonin, which is responsible for regulating our moods. Serotonin levels are highest during puberty, which is why teenagers tend to be more emotional than adults. The production of serotonin reduces as we age, and this explains why older adults are often more stable and level-headed than teenagers. Like any other part of the body, the pineal gland can be affected by disease. One of the most common conditions that affects the pineal gland is called calcification, which is when calcium deposits build up on the gland. This can lead to a decrease in hormone production and can even cause headaches and other problems, even affecting your spirituality. In fact, it's believed by some that fluoride which is put into our water supply can contribute to this affect of calcification so that is one of the reasons we should be drinking purified water whenever possible and detoxing.

Some suggested methods for de calcifying the pineal gland include consuming more iodine-rich foods such as seaweed and seafood, increasing vitamin D intake through exposure to sunlight or supplementation, and reducing fluoride intake by avoiding fluoridated water and toothpaste. You may already be aware of this, but one of the bodies largest organs is the skin, and you can open up the skins pores simply by getting into a hot sauna or jumping into a steamy spa pool for hydrotherapy massage. Not only does it relax the mind and help prepare you for a good nights sleep full of wonderful dreams, it's also helping you to detox and this will contribute to the detoxification of your pineal gland. Of course a good detox program should also include physical exercise and a well balanced diet of fibre and vegetables, other detoxification methods such as saunas, enemas, and juice cleanses. Ultimately, it is important to consult with a healthcare professional to find out what method may be best for you.

There's still a lot we don't know about the pineal gland, but scientists are continuing to study it in hopes of unlocking its mysteries. In the meantime, you can support your pineal gland by eating a healthy diet, exercising regularly, and getting enough sleep. By taking care of your body, you'll be giving your pineal gland the best chance to function properly. Thanks for reading! We hope you found this article helpful in explaining what the pineal gland is and why it's important. Feel free to comment and share.

Our spas in action to give you some ideas

A good alternative to the backyard inground swimming pool, expecially throughout the colder winter days

A full body workout instead of time a the gym

You can actually get a decent cardio workout in a swim spa; jogging or swimming

My turn to use the controls

Adjustable swim jet stream for all strokes; freestyle demonstrated in this photo

Leg toning with a gentle kick supported by the grab rail at the swim jet end : at home swim training in myPersonalTrainer 4.5m swim spa

Fun in the M5Watersedge swim spa

Breaststroke for him & a massage for her : at home swim training in myPersonalTrainer 4.5m swim spa

Use your swim spa for toning your whole body; added support from the stainless steel grab rail above the swim jets

Nicole is guided through a routine by our physio

Nicole is guided through a workout by Sharon our personal trainer

Spending time together in the backyard in our mySwimgymEXTREME swim spa

myPersonalTrainer 4.5m swim spa with room for 5 kids to splash around & a massage seat for Mum & Dad too! Also available in 5m & 6m length- imagine?

We have an ultimate guide to buying a spa pool.

Fill in this form and we'll get you to the guide.